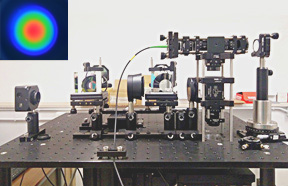 The research aims to investigate the applications of quantum properties of light toward the so-called Second Quantum Revolution (https://qt.eu). Special attention is devoted to develop novel techniques in quantum imaging and sensing that exploit quantum correlations of light to overcome the intrinsic limitations of current devices. In particular, the Quantum Optical Technologies Lab, led by prof. Milena D’Angelo, has proposed and developed a novel imaging modality, named Correlation Plenoptic Imaging (CPI), capable of performing 3D imaging and refocusing, while overcoming the resolution versus depth of field trade-off characterizing conventional imaging systems.

Applications of CPI are currently being developed for ultra-fast 3D microscopy, ultra-low-noise imaging, as well as high-resolution multispectral imaging. The results of this research in quantum optical technologies are of interest for biomedical imaging, security and remote sensing, 3D imaging, etc. The activity is supported through both national  (UniBA, INFN, MIUR, MISE) and European projects (QuantERA, https://www.quantera.eu/calls-for-proposals/funded-projects-call-2019/95-qu3d).

Femtosecond and picoseconds fiber laser technology allows to achieve precise microstructuring of any material without collateral damage to the surroundings. Our research focuses on the study of light-matter interaction at extremely short time scales and on the development of  smart sensors to understand and control the laser process. Our main research activities are focused on micromachining processes for the manufacturing of photonic and mechatronic components. In particular, laser based micromachining of metals like surface-patterning, drilling, milling and engraving  are routinely investigated to study the effect of high repetition rate and high average power on the morphology of the microstructures.

The research aims to understand the interplay between the laser beam, the material and the surrounding atmosphere during high power laser processes, with particular interest for welding, cutting and drilling with traditional as well as novel fiber laser sources. Development of optical sensors for real time monitoring and closed-loop control of laser processes is also addressed. Laser welding and cutting are a crucial technologies enabling reduction of thermal distortions of the weld assemblies and enhancing productivity, but their application to ultra-high-strength steels, aluminum, magnesium and titanium alloys and composite materials is far from being a reliable technology. We investigate the physics underlying the laser material interaction, paying special attention to absorption of the beam in the material, heat conductivity, dynamics of gas shielding, melt, vapor and plasma.

Laser feedback interferometry is being applied both to technical problems in mechatronics and to fundamental issues in laser dynamics. In the first case, with the aim of providing efficient and cost effective solutions for contactless measurements. In the second case, as a powerful investigation tool of the manifold realm of nonlinear laser dynamics.  Laser-self-mixing (LSM) was soon discovered as a promising candidate to replace interferometers in almost every application where a precision optical measuring system were required for the measurement of displacement, distance, velocity, vibration amplitude. In spite of its simplicity and the many proved realizations, laser-self-mixing has not yet sprang off a relatively small scientific community, possibly because of the onset of periodic and even chaotic instability in the diode-based LSM sensors for a sufficient feedback power. 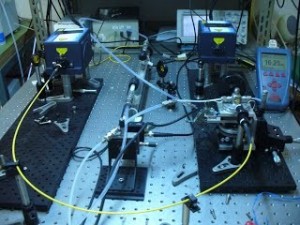 The research aims to develop optical sensor for detection of gas species of interest for industrial, enviromental, biomedical and security applications. Special attention is devoted to the study of gas exhaust produced by diesel engine. The CNR-IFN gas sensing group lead by Prof. Spagnolo has demonstrated ability to detect several type of gas species.  The technique used is based on photoacoustic effect and infrared and Thz Quantum Cascade Lasers. The photoacoustic effect is the generation of an acoustic wave in a specially designed gas cell that arises from the selective absorption of modulated light of appropriate wavelength by the target component of a gas mixture. The amplitude of this sound wave is directly proportional to the gas concentration. In standard photoacoustic spectroscopy (PAS) the generated sound detected using a sensitive microphone if the laser beam is modulated in the audio frequency range.

The research aims to study the thermal and electronic properties of MID-IR and THz quantum cascade laser. Raman  and photoluminescence (PL) spectroscopies offer several advantages for microscopic analysis. Since they are scattering techniques, specimens do not need to be fixed or sectioned. Spectra can be collected from a very small volume (down to 1 µm in diameter); these spectra allow the identification of species present in that volume. Thus, Raman and PL spectroscopies are suitable for the microscopic examination of minerals, materials such as semiconductors, polymers and ceramics, cells, proteins and forensic trace evidence. Expanding applications for Raman and photoluminescence microscopy and analysis into low dimensional semiconductors heterostructures and devices requires advanced performances in spectral resolution, laser rejection and sampling capabilities. Our high performance micro-probe laboratory give unique access to devices and measurements not easily achieved on a routine spectroscopic instrument. In the last eight years we dedicated our activities to the experimental study of important issues for the development of both GaInAs/AlInAs/InP and GaAs/AlGaAs Quantum Cascade Lasers (QCLS).

Cavity solitons (CSs) are bidimensional localized structures (LSs) that form in the transverse profile of the radiation field propagating in a coherently driven nonlinear optical resonator with high Fresnel number. These bright intensity peaks sitting on a homogeneous background are the effect of the competition-balance between diffraction and self-focusing in presence of a dissipative feedback.. A single CS can be turned on and off independently from the others by means of suitable addressing beams and moves in presence of amplitude or phase gradients of the injected field. Cavity solitons have been predicted and experimentally observed in a broad area VCSEL in 2002. The fundamental interest of CSs lies in their being an example of self-organization in a complex dynamical system.
Their unique proprieties (multistability, plasticity, etc) make CSs in VCSELs excellent candidates optical “bits” for applications to information storage and processing: parallel and reconfigurable optical memories, all-optical logic gates and circuits, optical delay lines, serial to parallel converters.